We are an authorized dealer of DJI, Gudsen Moza, Canon, Insta360, Instax, Viltrox and other exciting brands. 7 day replacement and 1 year warranty apply. Same Day Delivery Cut off is at 11 am. Please chat with us for questions as we would like to ensure you get the right gadgets for your use. Our address is Altitude Digital, Sparta PH, Pioneer Street, Highway Hills, Mandaluyong (Pin: Sparta PH), Mobile is 0917 134 2667

The Moza Mini-P is an ultracompact 3-axis motorized gimbal stabilizer for cameras, smartphones, and action cams weighing between 0.3 and 2 lb. A smartphone adapter is included that supports phones measuring 2.3 to 3.5" wide. Supported cameras, in terms of size, include the Sony a7S and a6500, Canon M5, and Fujifilm X-T3. An example setup the gimbal was successfully tested with consisted of a Sony a7-series camera with a Samyang AF 35mm f/2.8 FE lens.The gimbal offers 360° pan, 360° tilt, and 330° roll motion and also features creative motion functions such as FPV, sport, and inception modes. In inception mode, the camera rotates in place. When this mode is used while you're walking forward, it delivers a rich and elaborate-looking shot. Inception mode can also be used when you have the gimbal mounted on a standard or motorized slider and in various other setups. These creative modes are assignable via the companion iOS/Android app, which also provides other creative tools and functions.The gimbal runs for up to 20 hours on two built-in batteries. The mounting platform can be set up horizontally as well as vertically for portrait-style shots. A mini tripod is included that can be used as a stand or as an extension on the bottom of the gimbal to allow for better handling in certain applications. The mini tripod secures into a 1/4"-20 mounting thread on the bottom of the gimbal. A charging cable and other accessories are also included.

Salamat po sa freebie na bag. ?? Secure naman po at protected yung package. Instead of buying cp or action camera gimbal, this is better, 3 in 1 is better. I can use it for my Sony Alpha camera and action cam. And I can attached accessories to my phone with Moza Mini P compared to cp gimbal. This also much portable and longer 20hrs battery life than the competitor 3 in 1 gimbal that don't fold and only 7hrs battery life. Will do further testing.. 2 thumbs up ???????? 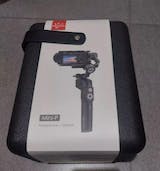 Got my Moza Mini P faster than expected. Package was properly sealed and protected on top of its already rigid case. Overall, superb product quality you can actually feel. No doubt, 5 out of 5 would recommend this product for casual users in the market for gimbals. Thank you! 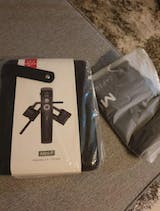